SILENCE hung heavy in the air as I slumped back in my deckchair and contemplated the events that had just unfolded. It had only been a few short hours since the interloper’s demise and I was still in disbelief that it was finally over. Was it true? Had the demon returned to the hell fire and brimstone from whence it came?

There was still no birdsong floating in on the breeze and I wondered to myself if my friends would ever be brave enough to return or would they stay clear just in case the evil black tyrant reappeared to attack and terrorise them once more.

The chop-chop of a rescue helicopter broke the silence as it made for the roof of Nambour Hospital just to the west of my unit block to unload some poor unfortunate patient. Then the rumble of a train added to the cacophony as it approached Nambour Station, an equal distance to the east. 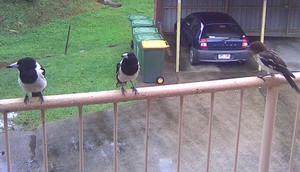 I was lost in my reverie, unaware of anything more than my thoughts and the mechanical sounds that assailed my eardrums when I cast a casual glance ahead and there perched on the railing were three of Squeaky’s crew, quietly but intently watching me.

In astonishment and relief I yelled out to the Old Bird next door, ‘The little buggers are back!’ My yell startled them – and the Old Bird too – but the birds soon settled back with a look that said, ‘Well, you big ugly unfeathered bonehead, open up the shop, we’re hungry.’

Next door stood there with a contented smile on her face as I served up hamburgers galore to the welcome visitors. Not long after that, Mum and Dad returned (Dad is pictured to the right of Mum) and very 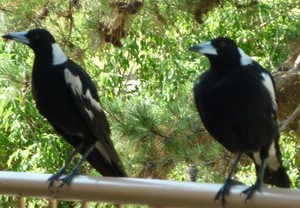 quickly things returned to normal – as if their term of exile had never happened.

For awhile, there were a few cautious looks before the birds flew off, but soon they didn’t bother, all except for Dad. He suffered the most from the interloper’s attacks and for a long time, cast a furtive look over his left shoulder each time he prepared to fly off to his tree house.

He has never really got over it. Added to his trauma was the fact that every time I whacked the roof guttering with the piece of wood to scare off the interloper, Dad was there. His little bird brain could never comprehend that I was doing it to scare his adversary not him, rather, he thought that he was the target. 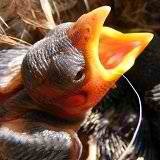 To this day, he treats me with caution unless I’m standing still or sitting down. All was normal again though, Elvira continued to grab takeaways to feed her chicks and knowing where her nest was, I regularly grabbed my binoculars to take a look at her fast growing babies.

Their little yellow beaks gaped hungrily up to her when she arrived with the tucker, then disappeared below the nests rim to quietly await the next delivery.

But their little lives would now be in jeopardy, for as I was to discover – in our world that follows Mother Nature’s rules, ‘Chicks without a father were at grave risk’…

Dan’s Quote: “We falsely believe that man creates the law of the land that we live by…
_____________When in essence, all life on Earth lives predominately by Nature’s law.”