DAWN’S GOLDEN fingers of light probed seductively into the inner sanctum of my darkened bedroom, wantonly prying and piercing through the cracks in my tightly closed vertical blinds and tantalisingly raising me up from the depths of my night’s slumber.

It was mid spring on the beautiful Queensland Sunshine Coast and the warmth caressed me slowly to full arousal. I idly stretched, then satisfyingly scratched my nether parts as I slowly made my way, as was my habit, to the front patio doors. Opening them, I then strolled nonchalantly out onto the balcony to greet the morning sun.

I casually drank in the familiar vista that faced me as I leaned lazily on the railing and began to form a wide and noisy yawn which was interrupted half way through as I noticed something strange in the carport on the other side of the driveway.

‘What in the hell is that?’ I thought. It looked like a black ball of some sort. I wondered if one of the other tenants had thrown a bit of rubbish towards the bins, missed and couldn’t be bothered picking it up. ‘Lazy buggers’ I said to myself, then suddenly the black ball moved ever so slightly.

It was more of a shuffle, or waddle, like a duck with no feet. This was getting stranger by the minute. I stealthily moved up towards

the stairs, keeping a close eye on this alien image. It must have saw me for it moved again, still in a legless shuffle and away towards the back of the carport.

As I got a bit closer, I saw one beady yellow eye peeking out from the black ball looking straight up at me. I crept a little closer and recognition suddenly dawned on me.

‘This must be The Interloper’ I exclaimed in surprise, to no one in particular, ‘but why crouch down in the carport like that?’ The nearer I got, the more certain I became. This was indeed, The bloody Interloper.

It glared up at me with a look of abject hatred and loathing, as if I was to blame for the predicament it was in. Although not warranted, there was certainly no love lost between us for I had given it as harder time as I could whenever it attacked Dad or any of the other birds. 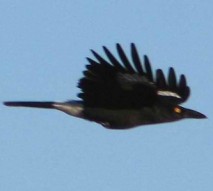 Being a typical despot, it was in reality a craven coward that hid behind a false facade of brutality and intimidation. I had found that out, for the only way I could deter it from attack was to bash noisily on the roof guttering with a piece of wood.

This made him flinch and his wings twitch in fear every time I did this and it slunk to a higher and higher branch of the tree giving the birds a slight chance to get away unscathed.

The goose bumps began creeping up my spine as I realized I was a bit scared. ‘Big sook’ I mumbled to myself, so I decided to leave the bastard alone for awhile and see what happened.

When I reached my front door, I looked back and it had waddled to the back wall of the carport where Elvira was facing him, squawking loudly and dancing about wildly in agitation.

Was she bereft at the thought of losing her mate, or was she saying to him, ‘Serves your right

you vicious mongrel?’ I will never know of course, but soon after that, as I was making my morning coffee, I heard a blood curdling screech coming from the direction of the park, a sound that lasted a good minute or two and made my hair stand on end.

I’ve never heard the call of a banshee, but I could well imagine that the sound I heard was pretty close to that. Then The Intruder was gone for good. It took quite a while for that fact to sink in, but he has never returned.

What killed him I don’t really know, maybe he was poisoned or maybe another bird finally retaliated against his brutality, or then again, maybe it was Elvira herself that rid us (and her) of the tyrant. But Elvira’s troubles were not over by any means…