10: On Patrol With The Bruce’s

ELVIRA became more confident over time and would sometimes sit a way up from the crew at the very end of the building, perched on the guttering and accept the bits of hamburger that I threw to her. If I was slightly off line with my throw, which was often the case, the missiles were in danger of being intercepted and eaten by the more experienced and crafty butcherbirds.

She came less often when she began to build her nest in the neighbor’s camphor laurel tree. I remembered that the currawongs had done this in previous years before the hamburger stand opened and I had any sort of relationship with the birds.

I thought nothing of it at the time and continued to feed the hordes that eagerly waited on the balcony for their fair share of the offerings. If only I had realized then what was to eventuate from that innocent nest building.

Apart from Mum and Dad magpie and the five or so members of Squeaky’s crew, there was also another family of birds that had lived around the local neighbourhood, and the block of units especially, since long before I became a resident.

They were the Bruces, (pictured above) a couple of peewees, or magpie/mud larks as they are sometimes called. The husband’s name was Bruce (to the right of pic) and his wife, Brucette, (to the left) a strange name but she didn’t seem to mind. My neighbor had named them well before I came on the scene, so I take no blame. 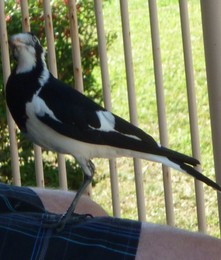 and the lineup of birds waiting for their turn to be served. They would push past the mob and myself as if we didn’t exist and patrol the full length of both sides of the building.

Marching along in military fashion, with one eye cocked towards the walls and eaves, they looked for any stray and unfortunate insect or spider that they would then expertly pluck from its hidey-hole.

Once that duty had been regimentally performed, they would then move down to the grounds to patrol the length of the front and back lawns looking for any careless grub or worm that was silly enough to stick its head out.

Over time, as I got to know them both, I found Bruce to be timid and a bit standoffish, he remains wary of me to this day but, as I was to discover later, he turns out to be a dutiful and caring father.

Brucette on the other hand was very friendly and approachable, so much so that she would happily scan the eaves for insects while perched on my lap (as pictured) and would become a trusting and loving customer at the hamburger stand.

They both would play more of a role in the story at a later date – After the encounter with the poltergeist that is….

Dan’s Quote: “”Don’t cry because it’s over, smile because it happened.”- Dr. Suess