EVERYBODY, both human and bird, slipped back into a familiar routine, while each day drifted lazily into the next in a peaceful repetition of normality. On this particular day, Bruce and Brucette had just passed us by on their regular patrol, ignoring both myself and the birds as usual and Elvira was conspicuous by her absence.

Squeaky and his crew were on the balcony catching bits of hamburger and stuffing them into their crop like there was no tomorrow. Mum and Dad were perched on the railing, seemingly at peace with the world.

Suddenly one of the butcherbirds on the floor stopped dead in its tracks, then jumped straight up in the air as if avoiding an object that I couldn’t see. He started to run as another squeaky jumped up in surprise and also ran out of the way. All the birds were looking with fear at this same invisible but moving spot.

Chubby (pictured right) was further down the floor and she started to run towards the end of the balcony away from me, looking back with apprehension as she ran, but apparently she was overtaken by this ‘thing’ for she suddenly  jumped straight up in the air like she had just been hit by a bolt of lightning. 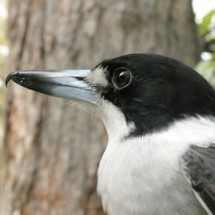 This invisible ‘thing’ apparently passed right under her while she was in mid flight for she now looked ahead of her instead of behind. All the birds were on edge and I realized that I had stopped in mid motion half way through tossing a bit of meat.

My mouth was dry and gaping open in surprise as my chin hung on my chest while I thought to myself, ‘W.T.F. was that?’ As quick as this thing had appeared, it disappeared and immediately the birds resumed feeding or to chill out as if nothing had happened.

It had to have been a poltergeist or something similar. All the birds saw it, even Mum and Dad (but they didn’t seem to be too worried about it). The butcher birds though were beside themselves with fright. I was surprised too, even though I couldn’t see it, so it took quite awhile for me to get over this eerie event.

The strange thing was that it was invisible to me and yet the birds could see it – shows you how dumb and ignorant human beings really are when it comes to nature – well, this human anyway. The poltergeist was to make regular, but infrequent appearances from then on.

Sometimes it would appear – to the birds, not to me – on the balcony and sometimes out in the next door neighbors yard or in the park. When that happened, all the birds would immediately stop what they were doing and turn to face exactly the same spot where this invisible monster was apparently threatening them.

I was continually at risk of looking ridiculous, being caught frozen in a statue like pose halfway through a throw each time it happened, and when the birds turned back around to face me, they always had this quizzical look that seemed to say, “What do you think you’re doing standing there like an idiot? Feed me.”

You may think that I am making up this story, but believe me, it really happened – and still happens on occasion. The poltergeist was by all accounts harmless for no bird was eaten up or mysteriously disappeared as far as I know – and I guess it added a bit of flavor to the day’s events.

In the meantime, unbeknownst to me, Elvira had finished her nest building and was preparing to go to the next step, laying some eggs and sitting on them, readying for the arrival of her chicks and also, worse luck, the arrival of the ‘Interloper’ – and the end of peace for quite a while…

Dan’s Quote: “A hen is only an egg’s way of making another egg.”- Samuel Butler