THERE they all were, perched on the railing outside my unit, mouths agape in expectation of a free meal. (my unit’s to the right with the screen door open) There was Squeaky and his crew, Mum and Dad, plus Bruce and Brucette who were hoovering the concrete for any near misses, as my throwing tends to be a bit off at times.

Suddenly a squawk that sounded like a chicken being strangled broke the peace and quiet, it was coming from the direction of the Old Bird’s unit next door. (To the left of mine in the pic.)

I looked around in surprise and there she was at her front door, hands behind her back with an appalled look on her ashened face. ‘What the hell’s wrong with you I 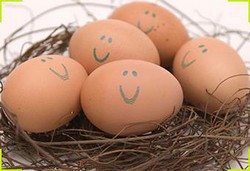 She looked at me as if she had just committed an horrendous crime and told me she had been watching me feeding the birds while peeling hard boiled eggs, when she suddenly realized what she was doing – right in front of the birds.

She had embarrassingly hid them behind her back hoping that the birds had not witnessed her desecration of their only means of reproduction.

I was stumped. There were no adequate words that I could utter, so I just blithered incoherently as she hastily beat a retreat into the depths of her unit and away from the judgemental eyes of the birds.

I looked around at the crew and for just a wee moment, felt that they might have indeed been upset, then I quickly came to my senses and with a jolt, suddenly thought to myself, ‘I’m as silly as her – well almost, but not quite.’

The birds couldn’t have cared less about a few eggs from some lower class common chooks, in fact during the whole time, their eyes never left my 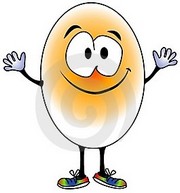 throwing hand readying themselves for the next acrobatic leap for a morsel of hamburger as they well knew my reckless aim.

It took quite some time before my neighbour became confident enough to face the world again, the birds especially. She confessed that she now realized just how silly she had been and that birds just haven’t got the intelligence to be aware of such things.

But I have a strange suspicion that she will never peel another hardboiled egg outside of her kitchen ever again, but I could be wrong…

Dan’s Quote: “It is not only fine feathers that make fine birds.”- Aesop