PARENT Currawongs Elvira and Gomez seemed to vanish into thin air not long after the birth of their (as I thought at the time) one chick. That one chick turned out to be five that have become quite active juveniles. I don’t know if they are all Elvira’s offspring or not, but they have happily settled down here anyway by the looks of it.

I have  lost track of who’s who so I call the ones that appear to be female, ‘Morticia’ – they are a bit smaller but much braver than their chicken hearted brothers – The slightly larger and more scaredy cat ones I call ‘Pugsley’ – from the Adams Family. Yes this embarrassing gender difference runs in the currawongs too. 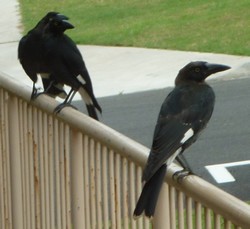 All the juvenile currawongs are gentle birds that are sociable with all the other birds in the crew, which proves that the interloper was a one off crazy Son-of-a-bitch bird.

It is so nice to see the same species of bird not disrupting the peace and quiet of the neighbourhood.

Pictured left is three of the young currawongs.

Anyway, one day I was sitting at my computer writing my next blog when out of the corner of my eye I saw a black bird sitting on the railing outside. I took little notice of it for I have a clear view of the balcony from my desk, so thought it was one of the currawongs.

They have yellow eyes but when I finally took a closer look at the visitor I saw a pair of deep red eyes glaring straight at me. It appeared to me to be thinking, ‘Wow! Just what the hell is that horrible monster with no feathers doing staring back at me?’

It was very curious and after giving me the once over, hopped down and inspected the bread and meat bowls, then did a quick scout along the balcony taking in all the strange things that it saw there.

It never ate anything, it was just curious apparently as to what attracted all the other birds to spend so much time here. 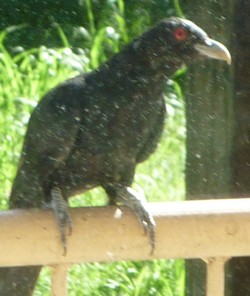 I took a couple of photos but it was so timid I couldn’t move from my chair and it was raining outside, so I had to take them through my rainy, grainy window – that’s my excuse anyway.

One of my photos is shown at the right.

It then flew away and has not visited since – not to my knowledge anyway. I did some Google research and found that it was a ‘Common Koel’ (a type of Cuckoo) better known as a Storm Bird.

It is very shy and not often seen, so I gathered that it probably had not seen a human close up before either, which explains its look of utter disgust and amazement. (note picture above)

It is frequently heard, usually just before a storm, (hence the name Storm Bird, Duh!)  You can just imagine the old timers saying, “Bugger! There’s that bloody Storm Bird again Mable, better get the washing off the line, rain’s on its way.”

Seriously though, it has a raucous, annoyingly loud call that once it is heard, you can never forget it. Click here to see and hear the call of the Storm Bird.

Its habitat is Papua New Guinea and the sub tropics of Australia down to Sydney apparently, so any reader from elsewhere will not be familiar with it. That may be a good thing I suppose – but maybe they are missing out on witnessing an amazing creature.

For mine, my very short interaction with the Storm Bird was a once in a lifetime special event where I got to meet another living creature face to face, a creature that is rarely seen by humans.

Dan’s Quote: “The only true law is that which sets us free.”- Jonathon Livingston Seagull